No matter how I alter the population or the mutation rate, the distance seems to get stuck around a distance of 8000 and a shape that it seems to stay in. I suspected that the mutation function didn’t made the “shape” the easiest permutation and the highest fitness in the beginning, so it stayed that way.

I changed the mutate function so that instead of swapping two random genes, it would pick genes and then randomly choose to replace them with the other chosen genes:

I then tried it out at 5% mutation and a population of 100. It got stuck at around a distance of 8000. Increasing the mutation rate to 7% got it closer. Increasing it to 10% got it even, even closer, down to 6700. I tried out a couple of different combos and I think this is the best it can do. This was a bit frustrating, but it made me realise that genetic algorithms have their limits, sadly. The initial population’s genes is important though, because that affects, I think, if it will reach the final solution. 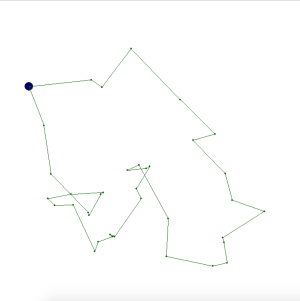